You are here: Home / Poetry / “The Present” by Billy Collins

Much has been said about being in the present.
It’s the place to be, according to the gurus,
like the latest club on the downtown scene,
but no one, it seems, is able to give you directions.

It doesn’t seem desirable or even possible
to wake up every morning and begin
leaping from one second into the next
until you fall exhausted back into bed.

Plus, there’d be no past
with so many scenes to savor and regret,
and no future, the place you will die
but not before flying around with a jet-pack.

The trouble with the present is
that it’s always in a state of vanishing.
Take the second it takes to end
this sentence with a period––already gone.

What about the moment that exists
between banging your thumb
with a hammer and realizing
you are in a whole lot of pain?

What about the one that occurs
after you hear the punch line
but before you get the joke?
Is that where the wise men want us to live

in that intervening tick, the tiny slot
that occurs after you have spend hours
searching downtown for that new club
and just before you give up and head back home?

~From The Rain in Portugal: Poems 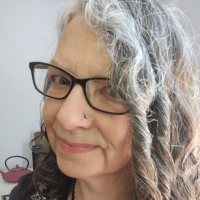 Julia is a yoga teacher, life coach, meditator, writer, artist, and wonderer. She lives in Madison, WI where she enjoys shoveling snow and geeking out about anatomy.

Three Must-Have Books on Happiness
Next Post: Twitchy? How to be Mindful When You’re Agitated

This site uses Akismet to reduce spam. Learn how your comment data is processed.